PowerPoint is one of the most used presentation tools in the world. Just like me, I am sure, many of you have had to attend more than one too many boring presentations. I believe the time has come to change this. It is high time to start creating vibrant presentations to generate happy audiences as well as happy presenters. How you can achieve this when using PowerPoint? To provide good answers, I am interviewing experts from all over the world who also long for ending the era called Death by PowerPoint. 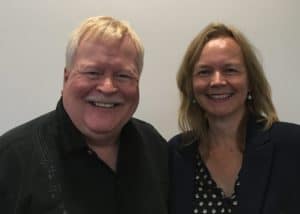 For this blog, I interviewed John B. Molidor. John is a Professor in Psychology and the President of the National Speakers Association (www.nsaspeaker.org), the main speakers association in the USA. Nine years ago, I saw him speak for the first time in San Diego. When I saw him speak again in Ulm last summer, something became clear to me: I wanted to interview John about how to create brain-friendly slides for a presentation that will have a clear message and lasting impact.  One thing I noticed in Ulm, while attending his presentation, was that his slides had a completely different look from the ones he had used nine years ago in San Diego. I was curious to find out what had been his reasons for the big overhaul in the style of his slides.

What can be found at the base of a brain-friendly PowerPoint slide?
When I saw John present for the first time, he had used a black background. In his presentations last summer, he had switched to a white background. I was curious to find out whether this change had anything to do with the way our brains work.

John lets me know that is exactly the case. Research on colour-blindness has shown that it is easier to distinguish colours against a light background than against a black one. A solid background also works better than an image or pattern as a background. John believes, when using a solid and light background, your brain won’t have to spend any time on figuring out what on the slide is the background and what is the important information. This is the foundation of a brain-friendly slide. He continues to explain the further design of his slides. If you choose to put both text and an image on the same slide, it is important to place the image on the left and the text on the right. This way the slide will be in tune with the two different brain hemispheres. To get the best impact with your slides, it is important to trigger both the left and the right hemispheres of your audience’s brains. Your left hemisphere is in tune with words and language whereas the right side of your brain is much more focussed on images. Because your brain controls your body crosswise, the text on your slide should be on the right and the image on the left.

John is very aware of this fact. He mentions that clipart is often seen as cheesy and outdated by the younger generations. So pictures might be the only way to go.  Whenever John is preparing a presentation, he looks for an image that either exudes the right emotion or amplifies his train of thought. To find an image fitting his audience, he browses stock photo websites for a picture of a person with the gender and age he considers most suitable. It is also imperative that your image is large enough. You don’t want your page filling image to be pixelated!

According to John, the key to a brain-friendly text is using few words. Those words are better distinguishable from the background when you put a shadow on them. The shadow cuts the letters loose from the flat background, which makes it immediately clear to your audience that the words are what it’s all about. Whenever you add a picture of someone to a slide with text, it is imperative that the picture looks into the slide and doesn’t look out of the frame. This way your audience will automatically follow the gaze of the person on the image and look towards the text instead of looking away from it. These small details can have a major influence on the impact of your presentation.

Would it be better to present without using PowerPoint?
Once in a while, I meet a speaker who consciously doesn’t work with a presentation program like PowerPoint, in oder to make the audience focus more on what he or she is saying. I am curious how John, as a brain scientist, views this method.

Do you want to present with more results? Frowa Schuitemaker is an expert on professionally connecting with audiences by using PowerPoint and how to speak with more long-term impact. She is the creator of the concept PowerPoint Intelligence.