PowerPoint is one of the most used presentation tools in the world. Just like me, I am sure, many of you have had to attend more than one too many boring presentations. I believe the time has come to change this. It is high time to start creating vibrant presentations to generate happy audiences as well as happy presenters. How you can achieve this when using PowerPoint? To provide good answers, I am interviewing experts from all over the world who also long for ending the era called Death by PowerPoint.

For this blog, I interviewed Chris Davidson form the UK. 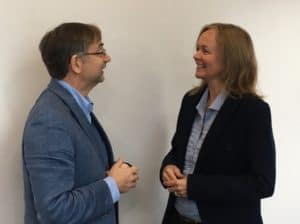 Chris is an experienced speaker and writer on the subject of presenting. It is interesting to pick each other’s brains or to attend one of his workshops time and time again. When I ask him about his background, he tells me originally was an engineer and a good draftsman. My question about his background turns out to be of great importance when it comes to understanding where all the common PowerPoint mistakes come from. I quickly realize that the history of PowerPoint, and especially the development of us as PC users, are crucial when it comes to understanding why we still encounter so many horrible presentations in the modern day business world. Reason enough for me to write two blogs about one interview.

In this blog, you will read the answer to the question why so many PowerPoints obstruct communication instead of helping it along. In my next blog, I will share the tips Chris gives on how to use PowerPoint in a way that it helps to get across your message and how you can take advantage of it as an advanced speaker. But let us first return to Chris’ background.

Why are engineers, in particular, able to make good PowerPoints?
Chris learned his communication skills on a blackboard that his father had screwed to the kitchen wall. This provided him with skills that would later come in handy at the drawing board. For him, it is an easy task to neatly write of draw almost perfect circles on a flip over.

Engineering drawing can be seen as a specific skill. As an engineer, Chris had to be able to draw up unambiguous images. The essence of engineering drawings is to convey the essential accurately so that the correct message is consistently and correctly interpretable by multiple people. That is what a blueprint has to do, so you can build the same airplane again and again and again and again from the same design. If you want to convey a clear message as a speaker, you need to make sure that, with the help of PowerPoint, your message can only be interpreted in one way.

The development of PowerPoint
When Microsoft announced PowerPoint in 1990, it was the introduction of business graphics. Before that, the only people who could use computers were engineers. Which isn’t surprising because the first computers were not developed for business graphics, but for engineering drawings. When the first version of PowerPoint was launched by Microsoft the only people who really knew how to use the incredibly limited functionality of PowerPoint were engineers. This produced a problem for Microsoft because the people they wanted to sell PowerPoint to, where business people. But business people didn’t know how to use a graphics product.

The intended audience of Microsoft
So, Microsoft had focused on the business world, but that target audience was not ready for a program like PowerPoint yet. Many managers had never even learned to type a formal letter themselves. That was a job for the people in the typing pool. People handed handwritten documentation over to the typing pool and got back a letter without mistakes and with beautiful layouts. The quality of the communication changed drastically when the personal computers came along and they were dumped on the people desks and they were told to type their own letters. The standard formats of the companies disappeared. Everyone had their own preferences for fonts and font sizes. Sometimes three different fonts were used in the same letter. This was Microsoft’s target audience. They wanted to sell licenses to these people.

Disastrous templates as a solution
To make PowerPoint easier for the people to use it, Microsoft decided to fill the program to the brim with templates. What are those templates? They were bullet point lists with a title hovering above it. Instead of focusing on how to improve communication in the workplace, Microsoft seems to have chosen for a more pragmatic angle. What is the simplest way to get everyone working with PowerPoint? Give the target audience templates with which they can make bullet point lists. The thing almost anyone can do. It looks neat, especially in comparison to what everyone was producing before. It looks good, so everyone starts using and buying the product.

Fast-forward to modern day and PowerPoint is a good product. And we have better computers to handle all of the functions the program offers. However, there are still many people who don’t know how to use the program to its full extent. You can read in my next blog how you can achieve this as I continue my interview with Chris.

Frowa Schuitemaker is an expert on professionally connecting with your audience by using PowerPoint and how to speak with more long-term impact.